The NGO Committee on Spirituality, Values and Global Concerns-NY celebrates the 75th Anniversary of the Founding of the United Nations on October 24, 2020.  The United Nations rose to heal and preserve a world full of devastation and destruction after World War II.  With its light the UN Charter gave hope and resilience to all of humanity during the challenging period of re-building after the war. The momentum of every accomplishment since its inception, towards the peace, security and well-being of the world continues to propel us to leave no one behind as we work towards achieving the Sustainable Development Goals.

Unexpectedly, seventy-five years later, the world is facing another momentous crossroads as Covid 19 has torn through our planet, leaving in it’s wake, the death of hundreds of thousands and revealing deeply unattended issues such as racism, intolerance, inequality, climate change, poverty, hunger, and corruption. It has been a year of dramatic disruption, not only evidenced in the rise of the COVID 19, but also evidenced in the areas of geopolitics and world economy including family, communities, cities and nations.

Instead of trying to overlook the newly exposed challenges, we need to accept and address those challenges.  We need to drink the deep waters of spirit and strength and infuse the same spirit of hope and resilience as at the time of the UN Founding. We need a moral conscience, which means that we are acting responsibly toward the people we serve, and that we are including the virtues of wholistic respect that the people of the world deserve. We must take a stand to build a sustainable and inclusive society. 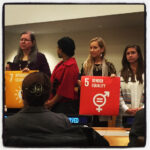 While there are reasons for despair, there is a great potential for a wide range of opportunities to emerge, a new way of envisioning our common life together as one global community, with innovative ideas that enhance and accelerate human development. The pandemic has taught us the fragility of life and the fact that we are not separate from each other, and that only together can we face the many threats we face today as the human race. The Charter is in peril because we have not taken to heart the people-centered approach of including peace, justice, human rights and inclusive development in our processes.

It is a time of opportunity to re-evaluate our ways of relations, challenge old habits and focus on what is truly essential in life. We must take a pause and look into what is right. We are concerned with our goals, but COVID 19 has exposed already-existing disparities and we must close the gap by a people-centered approach and a commitment to morality.

Let us make the commitment to build back better and work for the welfare of “the people left behind” in order to uphold the vision and resolve reflected in the UN Charter. These times call for a spirit of Stewardship, of the environment, of people and of resources.

As the COVID-19 pandemic has raged across the planet, and we have been confined to our homes, we at CSVGC have been reflecting on how to move ahead as spiritual leaders to address a response to the global community. This is a unique shared experience, which cuts across all barriers and boundaries. The disease itself has no identification with ethnicity, gender, economic status, legalities or spirituality. It affects every human on the planet. Yet, if we come together in solidarity to elicit a response, we might overcome this crisis and come out of it better than we went into it.

During this pause many have been inspired to go within to understand our shared humanity, our shared values, kindness and compassion for all people, as an antidote to adversity and fear. We have been compelled to put our own wellbeing first, in order to reflect that outward into strong and focused leadership. To strengthen our hearts with love for our work and to assure that no one on the planet is left behind in our efforts to recover socially and economically.

Stopping this pandemic and supporting recovery efforts will require a solidarity and collaboration born of innovative strategies with global wellbeing as it’s goal. CSVGC supports leaders in all countries and all sectors to embrace a generosity of spirit to put aside politicization and to put people and their wellbeing first. Once our nations wellbeing are assured, then economic and social sectors will have a platform from which to flourish and innovate. We have an opportunity to reevaluate our policies and put into practice ways in which to build a better planet. Creating environmentally supported, sustainable, healthy economies will allow us to build back better. With that we will infuse hope and resilience into our thinking and actions to ensure human dignity for all people.

We hope that you join us every Monday at 12:00 pm EST to hold this reflection in our hearts and set our intentions for the week in a few moments of communal silence and strength. By coming together, we build a strong platform for change and support each other to see this through.

It was a day for remembrance and recognition at the UN on October 29, 2019 when diplomats, spiritual leaders, representatives of various UN organizations, NGOs as well as concerned global citizens, religions and professions gathered for the 13th Annual Spirit of the United Nations Award Ceremony, as part of a larger Week of Spirituality, Values, and Global Concerns from October 21st to the 25th.

On October 23rd, 2019, the 13th Annual Spirit of the UN Awarding Ceremony, held at the Chapel of the Church Center on the theme The Call for a Life of Human Dignity: Reframing the Discussion on the SDGs and the 2030 Agenda, honored the following distinguished persons before an audience of 200 from the UN:

In the morning, there was a period for common meditation where the relevance of all faiths and communities was emphasized. A circle of hearts awakened to the human condition beyond nationality, religion and creed was sought and encouraged in those gathered.

Rev. Dionne Boissiere, Pastor of the Church, as dynamic Emcee, gave an enthusiastic welcome, applauding the honors being bestowed upon exemplary individuals who put into practice the UN ideals. Beth Blissman led a moment of universal prayer for peace. This prayer in many ways embodies the thrust of this event and its relationship to the UN, to bring well-being and peace to all mankind via a recognition of our oneness and spiritual harmony. 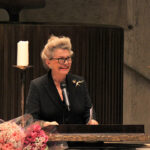 Everything took off on inspiring note with Luminous Trio, an accomplished violin trio featuring Mr. Lucas Stratmann, Ms Yuko Naito-Gotay, and Flutist Kazuko Miyoshi-Stratmann. Of considerable importance were the Welcome Remarks were delivered by H.E. Mrs. Katalin Annamaria Bogyay, Ambassador of Hungary to the United Nations. Ambassador Bogyay, a past SUNA Awardee, spoke about the importance of including the perspective of spirituality at the United Nations throughout its various platforms.  Rabbi Roger Ross, Vice Chair of the Week of Spirituality, shared about the spiritual history of the United Nations since its early beginnings. 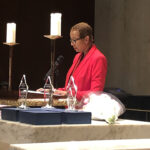 The first Award (Diplomat Award) was presented to H.E. Mrs. Rhonda King, Permanent Representative of St. Vincent and the Grenadines to the United Nations. In her uplifting Acceptance speech  she spoke about her life and how God guided her in a detailed manner,
every step of the way in her life until her appointment as Ambassador to the United Nations.

The second Award (UN System Award) was bestowed upon Hon. Elliott Harris, UN Assistant Secretary-General for Economic Development. During his Acceptance Speech, he gave profound insights into the role of the United Nations in solving humanity’s problems and the effective role of faith leaders.

Mr. Fred Nyabera, Director of Ending Child Poverty, of Arigatou International, received the
NGO Award. In his Acceptance Speech, he spoke about his work with women and children in Africa, and how the added faith perspective brought transformational changes in his work.

The Youth Award was presented to Ms. Jillian Abballe, and in her Acceptance Speech, she shared about her work as a youth and faith leader, which brought meaning and direction to her work with youth at the United Nations. 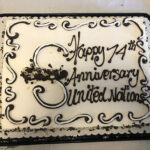 The 13th Annual Spirit of the United Nations Award Ceremony ended at 3 pm on the 23rd of October, 2019 with Co-Chair Rev. Cathy Towle’s closing remarks, and cake cutting for the 74th Anniversary Celebration of the UN. Altogether, it was a day that brought to heart our yearning to incorporate in our lives a more of true divinity in ourselves – a divinity that allows us to be individuals who live in peace and interdependence irrespective of the concepts placed upon ourselves. It was a day that manifested the harmony that we desire to put at the center of the UN and its institutions.  It also reflects the current need to include a tradition of higher values and inclusive spirituality as foundational and fundamental values upon which individuals, governments, nations and religions can truly come together, co-creating a better world with greater harmony. 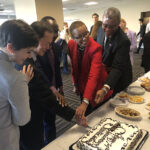 Co-sponsors for the Week were:

Participating Organizations were the following:

The Following article was published by the Policy Times on March 18, 2017

New York, NY – Women bring a different quality to leadership, and a unique set of circumstances, as evidenced by the diverse and inclusive series of events at the Commission on the Status of Women-61 at the United Nations. Each year, the CSW convenes for 2 weeks to measure the continuing struggles for women in attaining 50/50 representation in government, equal pay, economic empowerment, access to education, equality, justice; and the eradication of abuse, trafficking, and violence and it’s traumatic and often tragic
END_OF_DOCUMENT_TOKEN_TO_BE_REPLACED

by Diane Williams, Founder of CSVGC-NY
Remarks from Spirit of the UN Awards – October 25, 2016

“We can only succeed in achieving world peace if there is
a Spiritual Renaissance on this planet”,
– H.E. Dag Hammarskjold, 2nd Secretary-General of the United Nations

On October 23rd, 2015, the NGO Committee on Spirituality, Values, and Global Concerns-NY (CSVGC-NY) hosted the 9th Annual “Spirit of the United Nations” Awarding Ceremony at the UN Church Center. Every year, the CSVGC-NY honors outstanding individuals who have demonstrated the vision and spirit of the United Nations as expressed through the UN Charter, and the Universal Declaration of Human Rights. END_OF_DOCUMENT_TOKEN_TO_BE_REPLACED

The Spiritual Dimensions of Climate Change event during the Week of Spirituality, with Karena Gore, Former Amb. Isaiah Chabala of Zambia, Betty Lyons and Dan Kitteridge. Moderated by Cathy Towle and Swami Parameshanada.